2017 was another wild year for Denver real estate. If there were three ways to describe it, it would be: low inventory, low days on market, and multiple offers. All three descriptors attributed to rising home prices and frustrated buyers who are getting priced out of the market.

The median sales price for all of Denver County reached $395k in 2017; a number that has nearly doubled from $200,000, just ten years ago. Hilltop ranked the most expensive neighborhood, with a MSP of $1,115,000 and Goldsmith ranked the most affordable with an MSP of $143k. Breaking it out further: 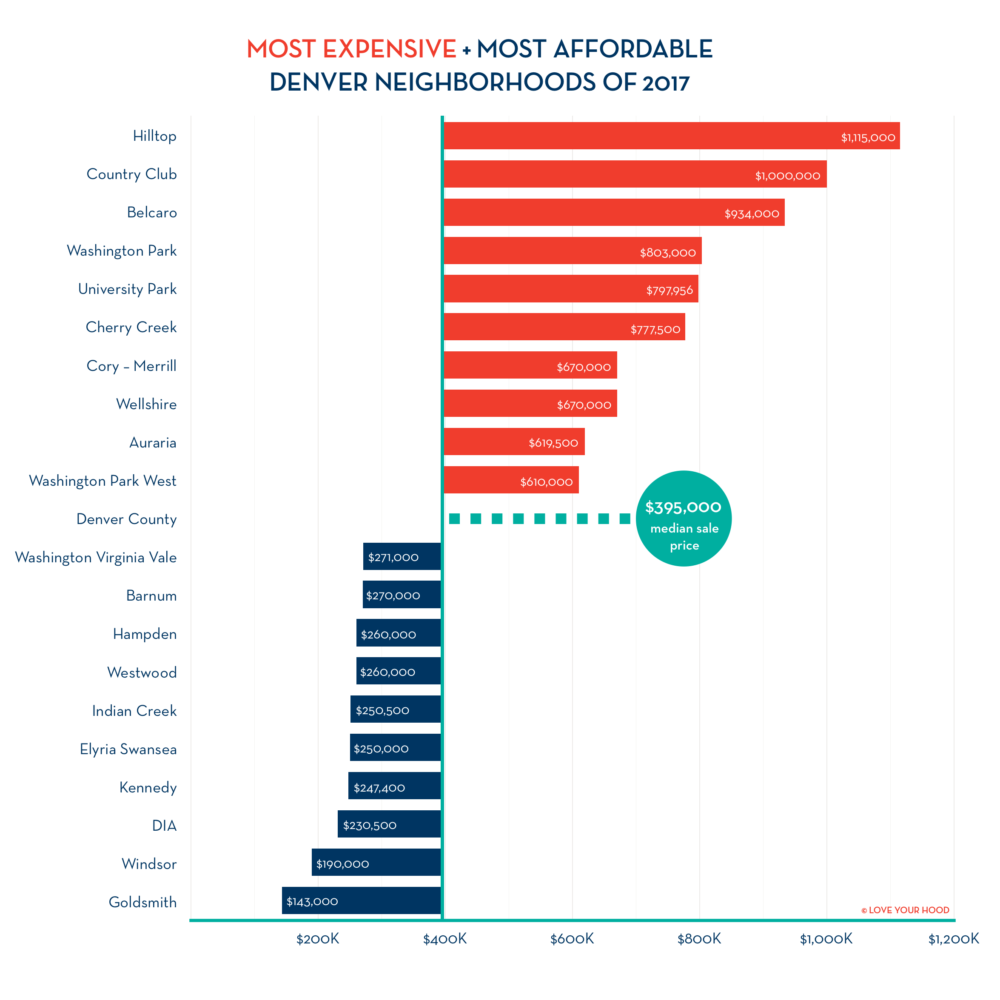 $143,000 – $1,115,000 is a large spread, there are still some affordable neighborhoods (and even a few opportunities to score a deal in more expensive neighborhoods). Either route you go, fast action, well crafted offers, and of course, a strong offer price are required to come out on top of the negotiations when buying a place.

One of the most common questions we get asked is, “which neighborhoods can we expect to appreciate the most in the upcoming years?” We can’t predict the future but we can rely on past market activity to give us a general direction of where we’re headed.

Denver County’s overall appreciation rate for 2017 was 8.2% (a smidge less than the annual average of 9.8% for the last ten years). Taking the 9.8% average, if you bought a home at Denver County’s median price of $395k, you would be able to sell it in five years for $585k, making approximately $190k off of the sale. The key take away is to get in the market as soon as possible to start the appreciation. It can literally cost you thousands of dollars by waiting a couple of months to purchase. 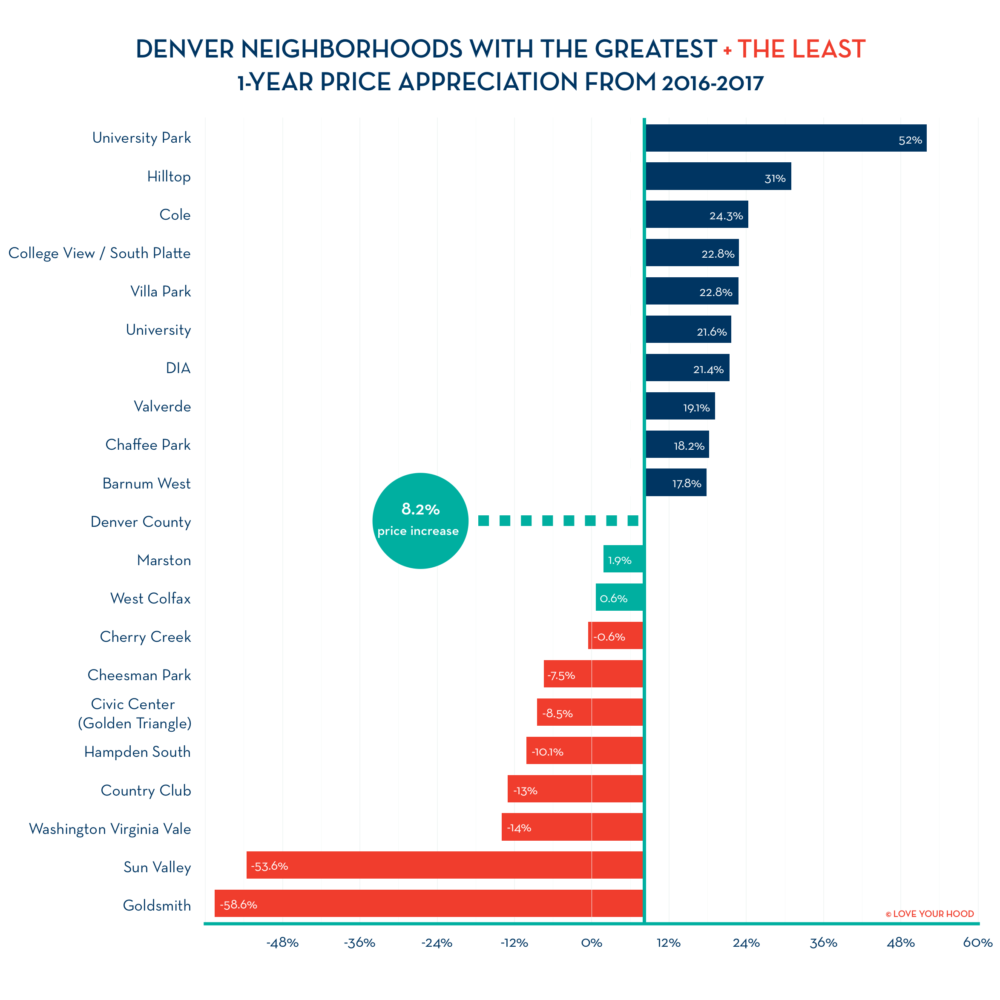 This is a great 12 month heat map on what neighborhoods are hot and where you could find potential deals. In case you are wondering, Sun Valley and Goldsmith (the ones in dark red) have very little sales, which skews the statistics.

Below are the neighborhoods that changed the most over the past five years. Globeville is coming in hot at at 263.3% appreciation, with Elyria Swansea not too far behind at 233.1%. This chart puts into perspective just how much change Denver neighborhoods are going through. Curious about Kennedy and Goldsmith? Not to worry, they have very few sales per year, which tend to make the statistics skewed. 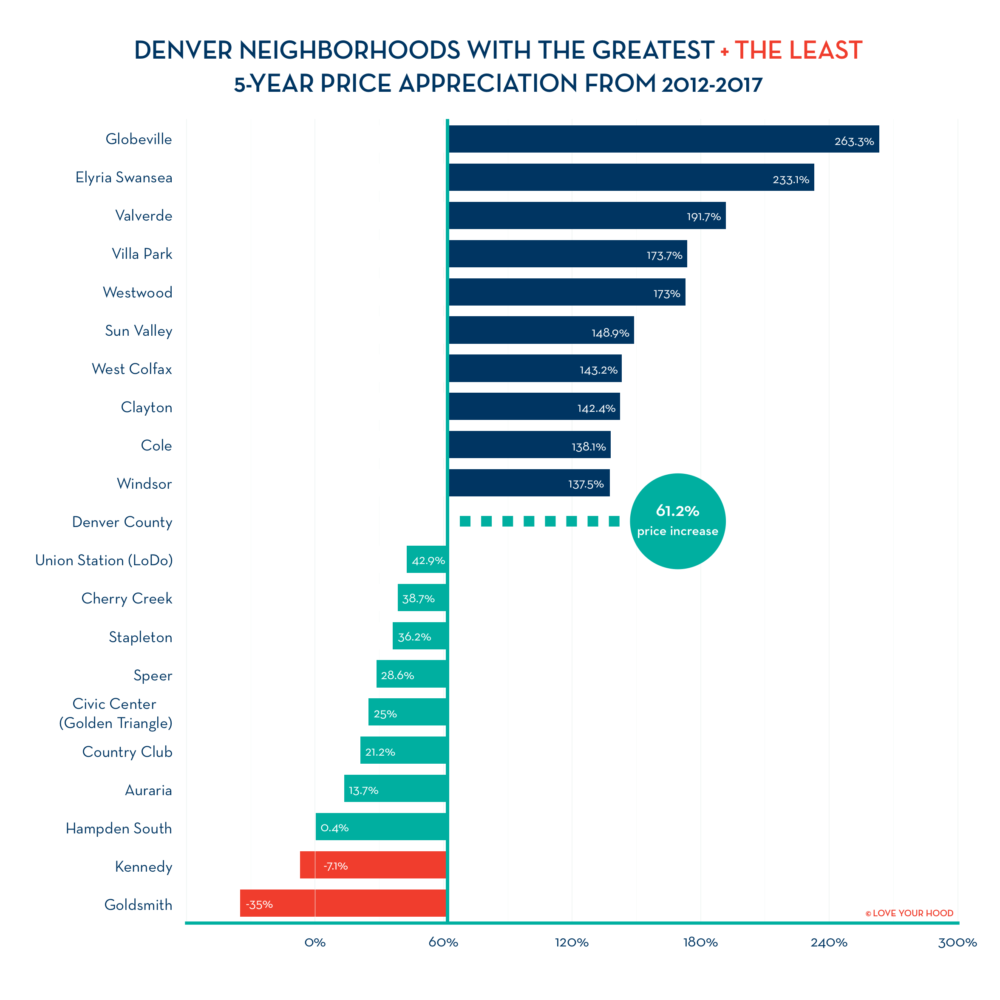 They say pictures are worth a thousand words. Well, in this case, those are dollars. There is no better reflection of how much Denver real estate has changed over the past five years, than what the map says. 83% of Denver neighborhoods have had a 50% to 300% increase in median price over the last five years.

Price per square foot (PSF) is a great tool for comparing properties and neighborhoods. The key is to compare similar property types (condo to condo, townhome to townhome, etc) when utilizing this statistic. It’s also a great indicator on your buying power for a given neighborhood. For instance, if your housing requirements include roughly 1,500 square feet, the average PSF will help narrow down which neighborhoods will work best with your budget. 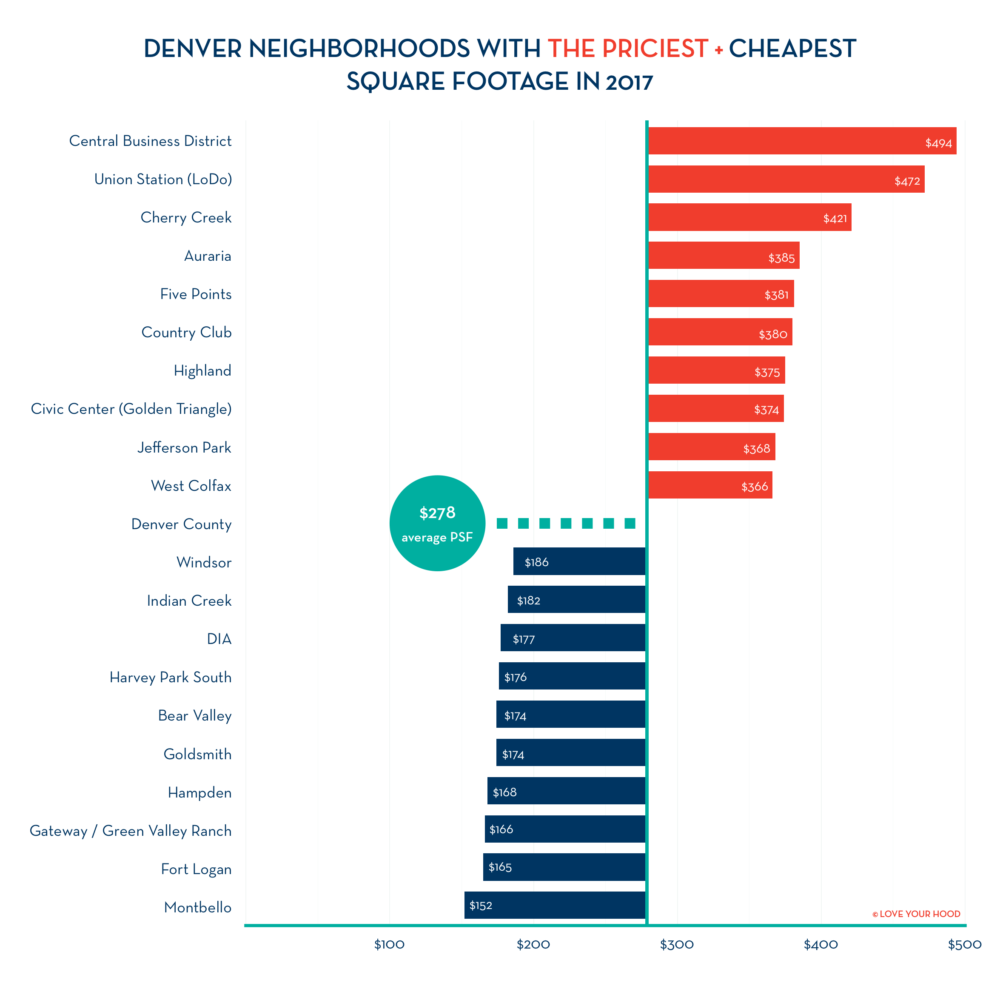 Map of Median Price per Square Foot by Denver Neighborhood

The more dense the neighborhood, the closer the average PSF inches towards $500. Makes sense, since all you are really buying is the actual square footage in the building or unit and there isn’t a yard that goes with it (think condo, loft). Northwest and southeast of downtown have seen significant increases in PSF and aren’t that far below Union Station, Central Business District, and Cherry Creek.

We don’t think it’s a surprise that the ten fastest selling neighborhoods (the length of time homes spent on the market) were also neighborhoods with a median sales price less than the average for Denver County as a whole. The majority of first time buyers’ budgets align with the prices in these neighborhoods and homes are going from active to under contract fast. 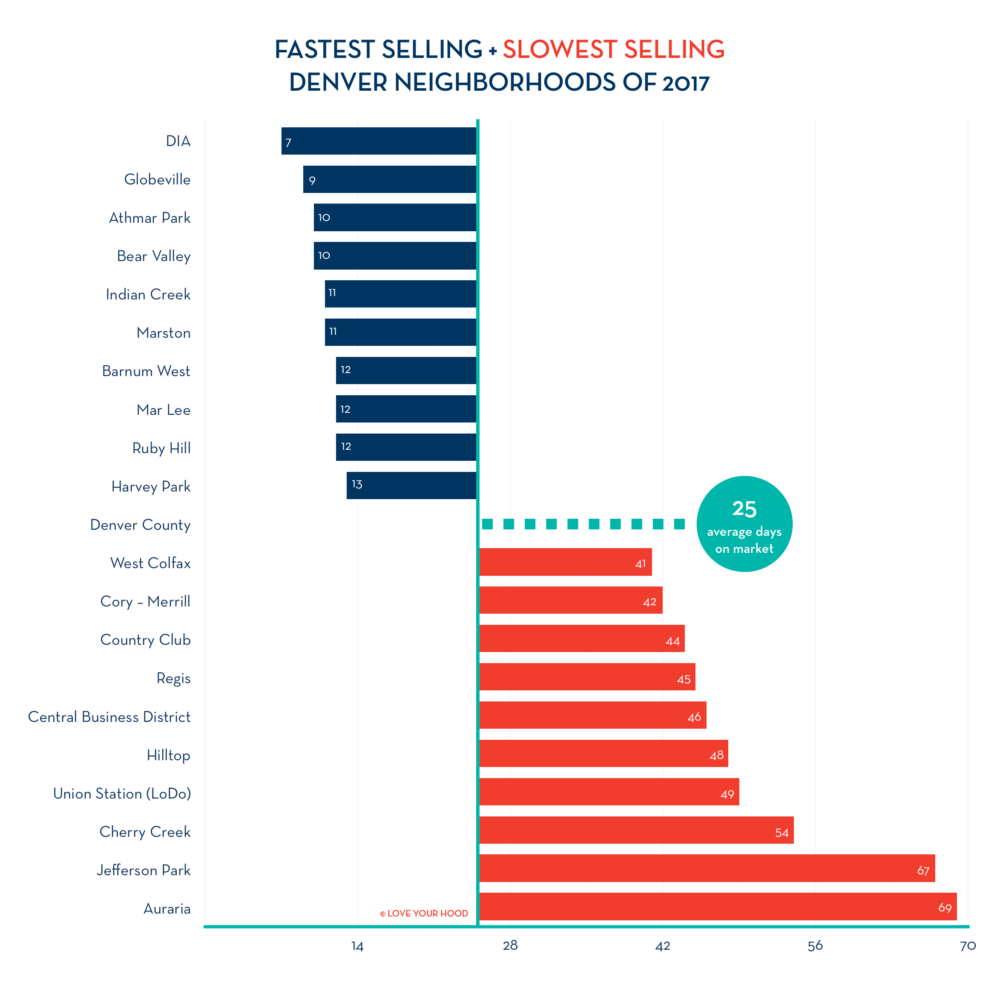 Map of Average Days on Market by Denver Neighborhood

This is a great visualization of how fast each neighborhood is moving during the sales process. Just shy of 75% of Denver neighborhoods are selling in less than 30 days, which means buyers need to be aggressive with their search and make decisions fast, as to not miss out.

Ok, lets be real: every neighborhood in Denver is low in inventory. Even the neighborhood with the most inventory in the city (Civic Center/Golden Triangle with 4.1 months of it) is still a seller’s market, which is anything less than 5 months of inventory. 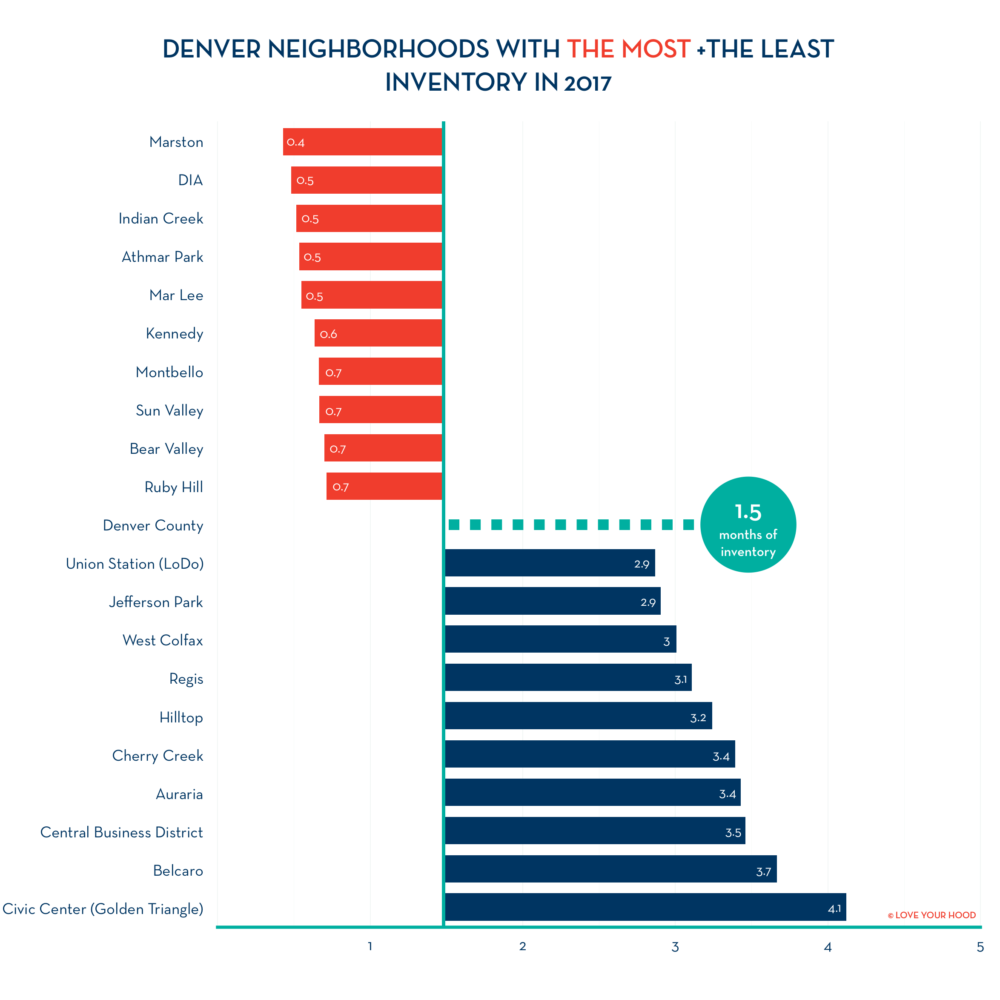 Map of Average Months of Inventory by Denver Neighborhood

Five to eight months of inventory is considered a balanced housing market (which would show in white on the map below, if there was any). Without any new housing stock added to the mix or a decrease in buyer demand, things will not change. Let’s be honest, out of the two, increasing density (building condo high to medium rises) will be Denver’s most likely option. It will increase inventory, stabilize medium home prices, and increase days on market. In other words, provide a needed reprieve for buyers! 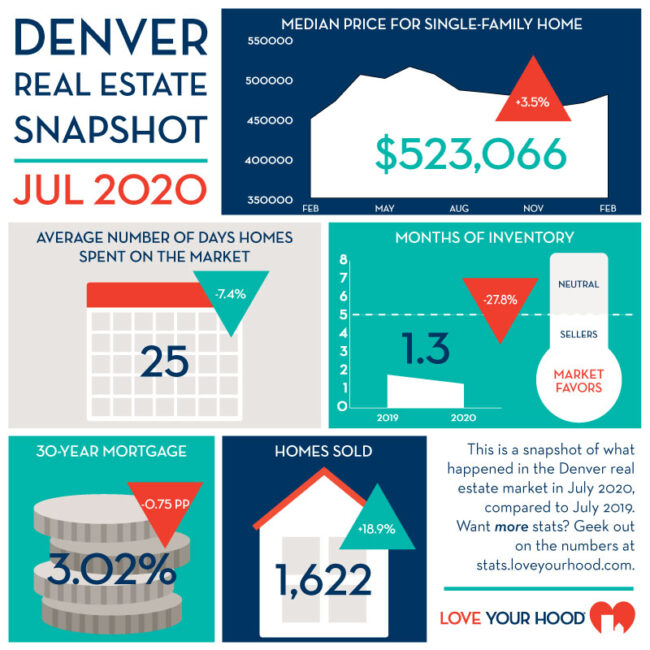 This market is hot, hot, hot! 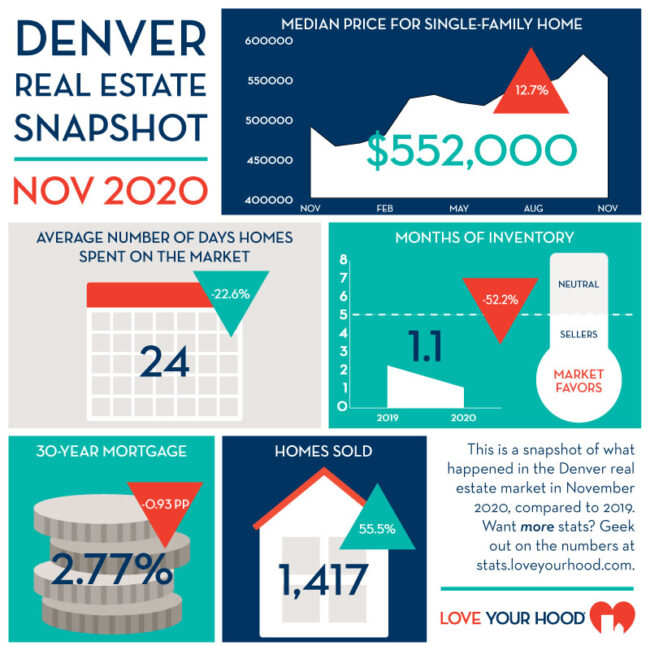 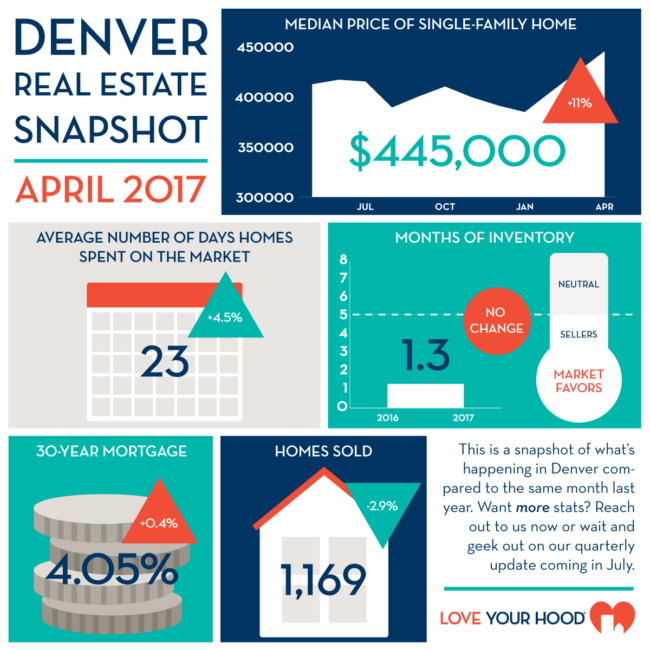