The Top Denver Neighborhoods of 2019

The end of a decade is always an excuse for reflection, and in Denver’s real estate market there is much to reflect on.  The events of the last year alone are a lot to take in… luckily, Love Your Hood is here with your easy-to-digest 2019 Denver market highlight reel!

Denver County as a whole saw a median home prices just over $442k last year.  Flashback to 2010, Denver had a median price of $203k. This statistic has more than doubled since the decade started!  Country Club topped the median sales price (MSP) charts in 2019, with a MSP of $1,164,000.  Goldsmith took home the most affordable neighborhood position with an MSP of $177,500. Check out how the other neighborhoods stack up in affordability: 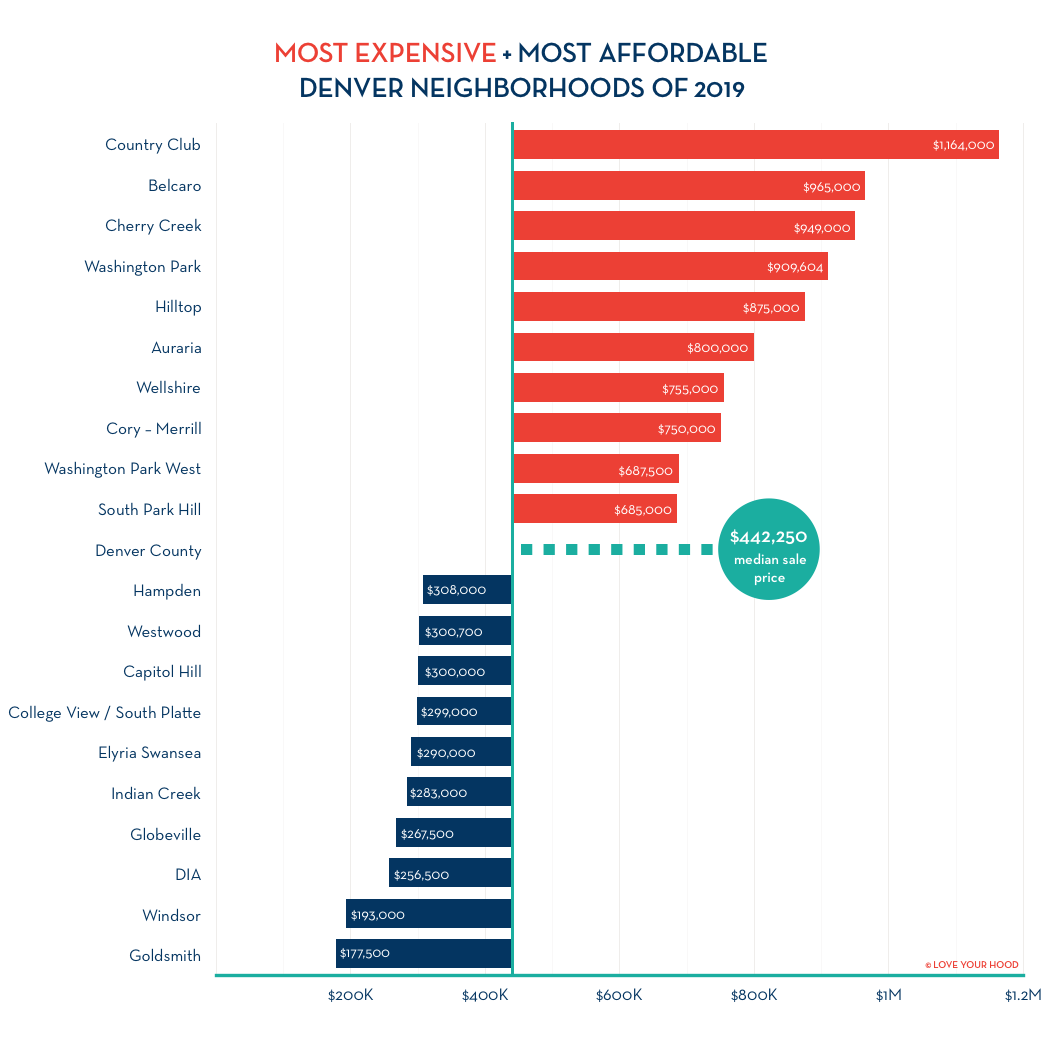 This interactive map shows the city of Denver broken down by affordability of median sales prices.  Scroll over a neighborhood to see its MSP for 2019, and use the buttons along the bottom of the map to share and see full screen. Read on to see Denver’s neighborhoods categorized in a few more useful ways!

We ranked Denver’s hottest up-and-coming neighborhoods using historical price growth data.  Topping the list for MSP growth in 2019 was Auraria at 28%, driven largely by the proximity to Union Station and low number of total homes in the neighborhood. Cherry Creek, Speer & Union Station (LoDo), three neighborhoods highly sought-after by homeowners and businesses, were also at the top. Notable as well is Marston and Elyria Swansea, two neighborhoods whose median sales prices fell under the Denver Metro MSP in 2019 but their MSP growth was near the top. 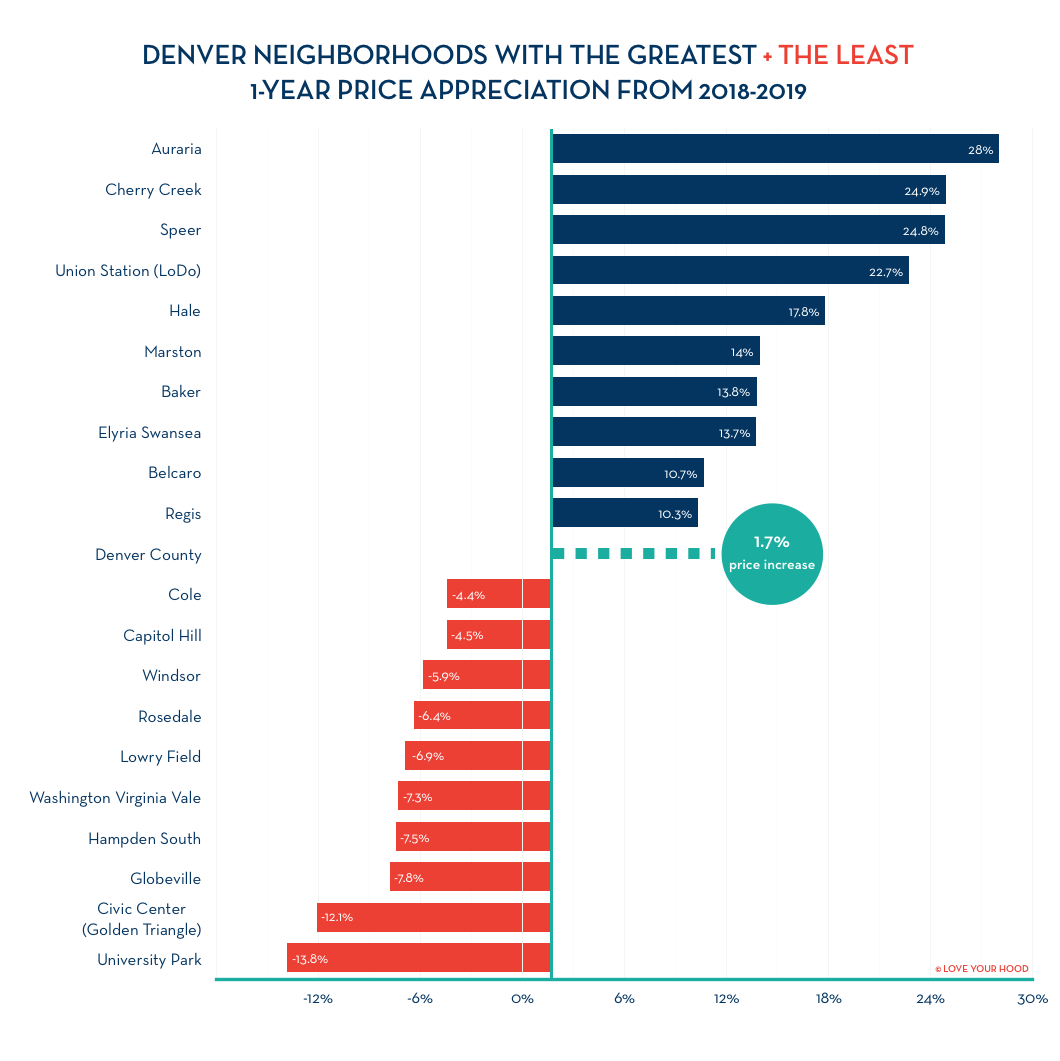 Dilating our focus from 2019 to the last 5 years, the top 10 growth neighborhoods change significantly. The highest growth in the past 5 years was seen neighborhoods located near outer boarders of the city. Many of these neighborhoods are separated from downtown by either I25 or I70. Being some of the most affordable neighborhoods, the top contenders on this chart were most affected by Denver’s past 5 years of population and economic growth. 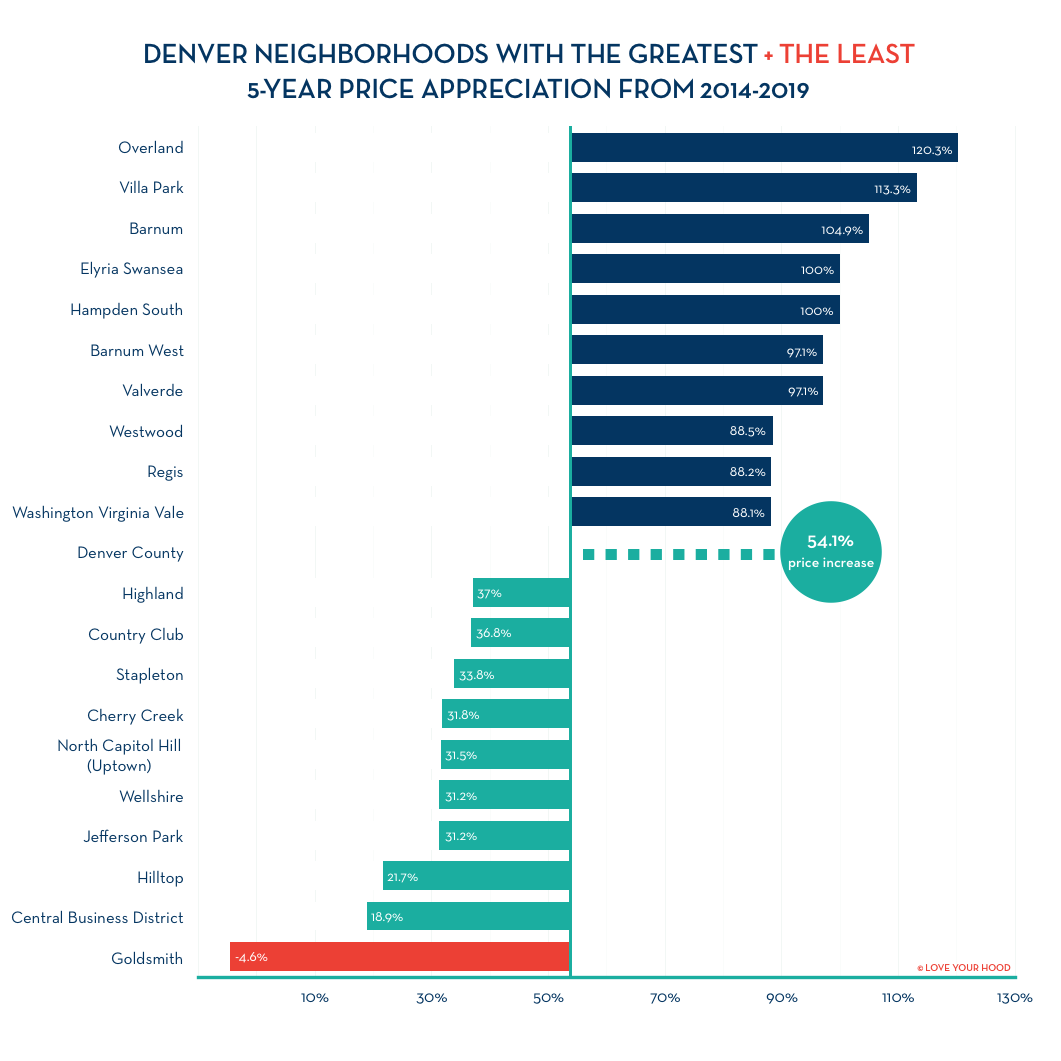 You probably noticed this map is a darker shade of red than the 1 year growth map. The neighborhoods that stand out in the past year are because of their high growth, whereas in the past 5 years the outliers are the hoods which haven’t grown by much or haven’t grown at all. Denver’s growth rate from 2014 until year end of 2019 was 54.1%, and almost every neighborhood felt that change due to widespread housing demand.

Price per square foot (PSF) is a great metric for homebuyers because it puts neighborhoods on an even playing field in regards to density. If you have minimum space requirements for your home search (which let’s face it: we all do) the PSF is an excellent tool. Multiply the PSF for a neighborhood by your space needs to get an idea of which neighborhoods work for your budget! Below we have the top 10 priciest and most affordable by PSF: 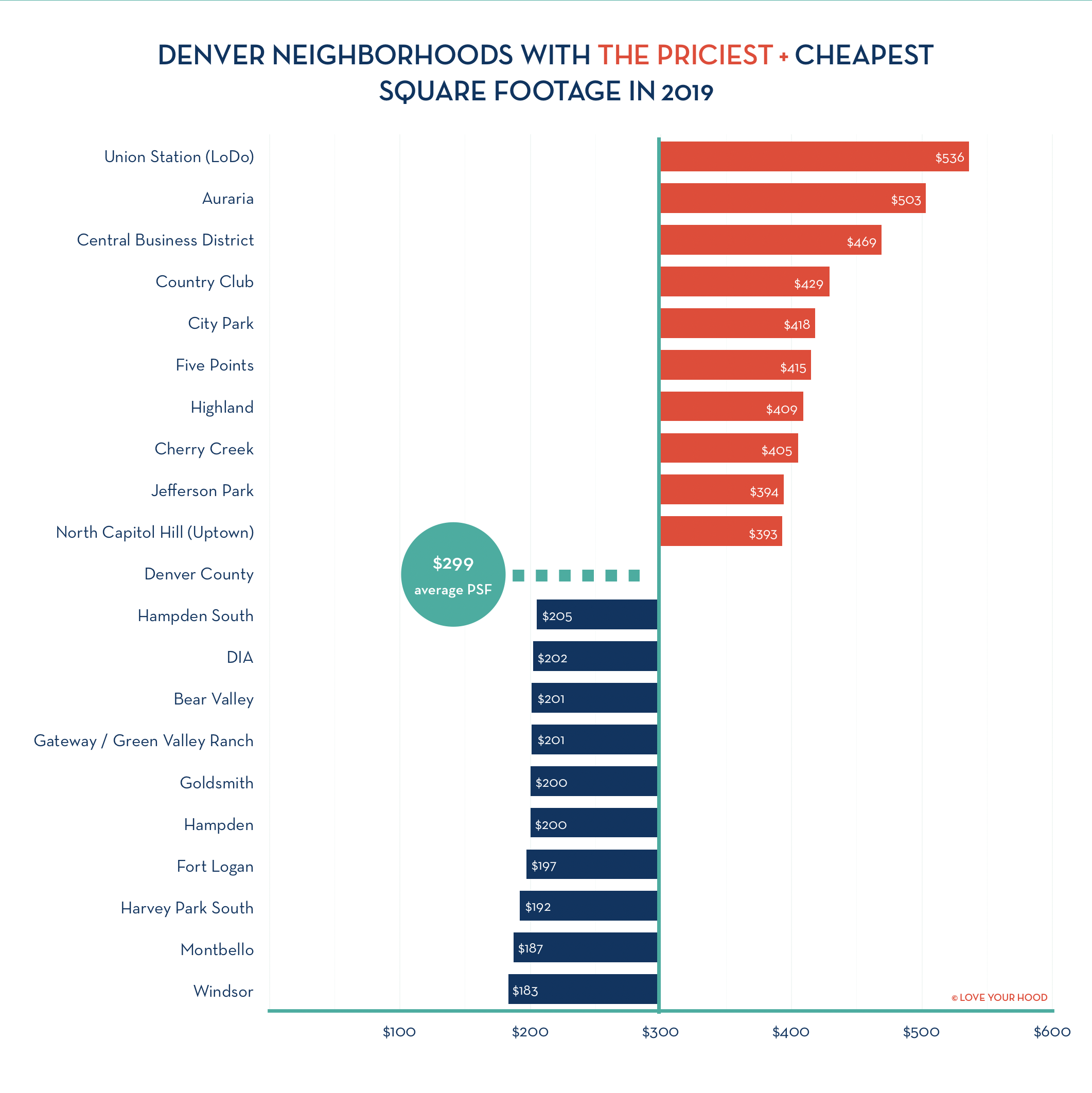 Map of Median Price per Square Foot by Denver Neighborhood

Most of the heat on this map is in the center of town. Take Union Station (LoDo), the highest PSF for residential homeowners and a tiny rectangle in the center of Denver vs DIA, one of the biggest, cheapest, and farthest from town. But this map also shows some of Denver’s true colors in neighborhoods like Cherry Creek and City Park. Here, despite being farther from downtown, the price per square foot is higher due to local attractions, restaurants and beautiful parks and recreation facilities.

If you’ve read into our recent market updates or stay in tune to Denver’s market in general, you know you have to be competitive to score an entry-level home. While the luxury home and condo market has softened in recent months, homes on the lower end of the price spectrum usually attract multiple offers and close fast. It should be no surprise that many of the most affordable to live in are where homes sell the fastest. The below chart reveals our fastest and slowest selling neighborhoods by the average number of days homes spends listed: 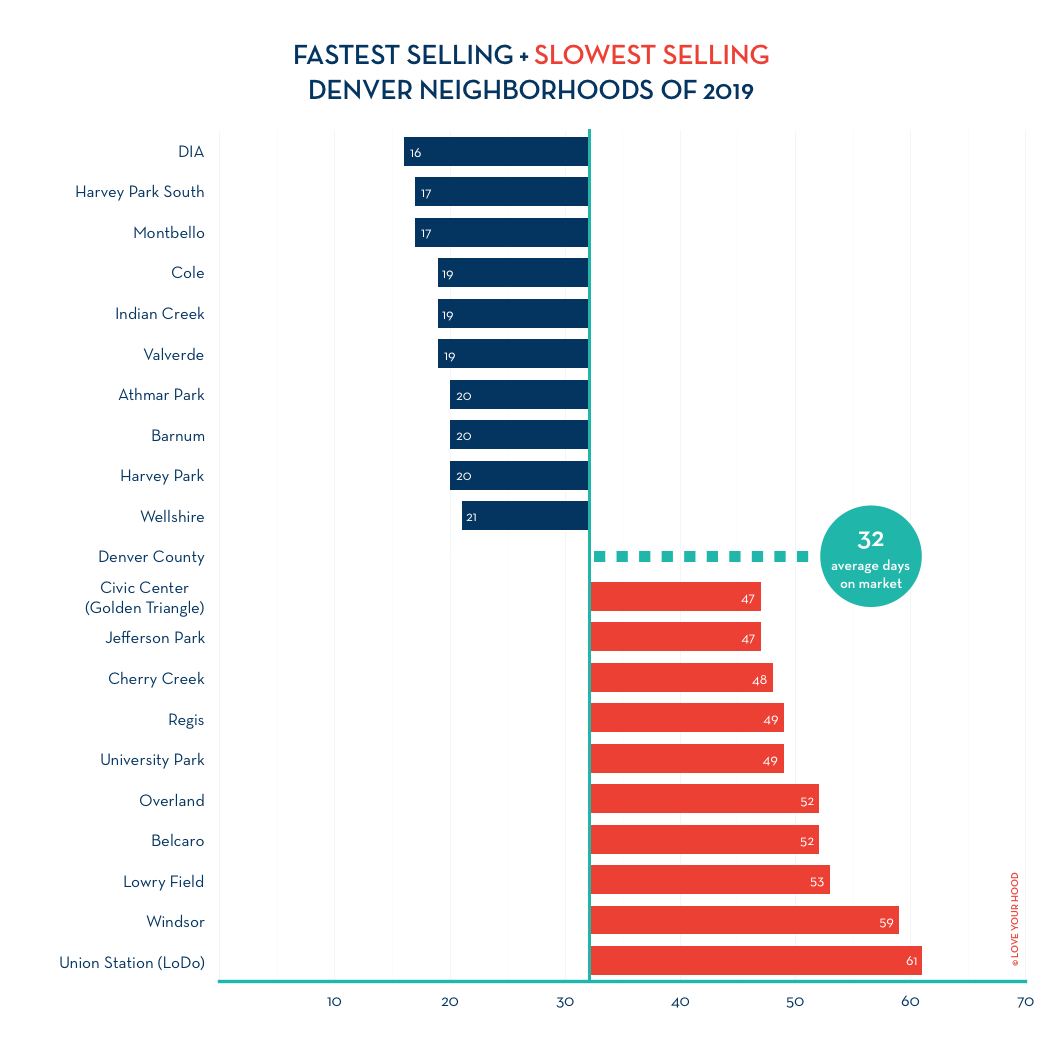 Map of Average Days on Market by Denver Neighborhood

The visualization below illustrates Denver’s affordability/availability paradox when compared to the last map for PSF. The shading is just about uniform between the Average Days on Market map and the PSF map above. The lowest median price per square foot cost neighborhoods are selling homes the fastest on average. With just over half of all Denver neighborhoods seeing their homes scooped up within 30 days , speed and decisiveness are crucial to securing the home you want.

Inventory? What? Where?? Yes, relax, it’s true. Some Denver neighborhoods have a (not yet there but close to) healthy supply of housing inventory. This can largely be chalked up to development in the past few years in several key neighborhoods like LoDo and Central Business District. Here, large projects have caused these neighborhoods to not only be some of the fastest growing in price, but also in housing supply! We can expect these key neighborhoods to keep growing at a faster pace than their surroundings so long as Denver’s economy stays strong. 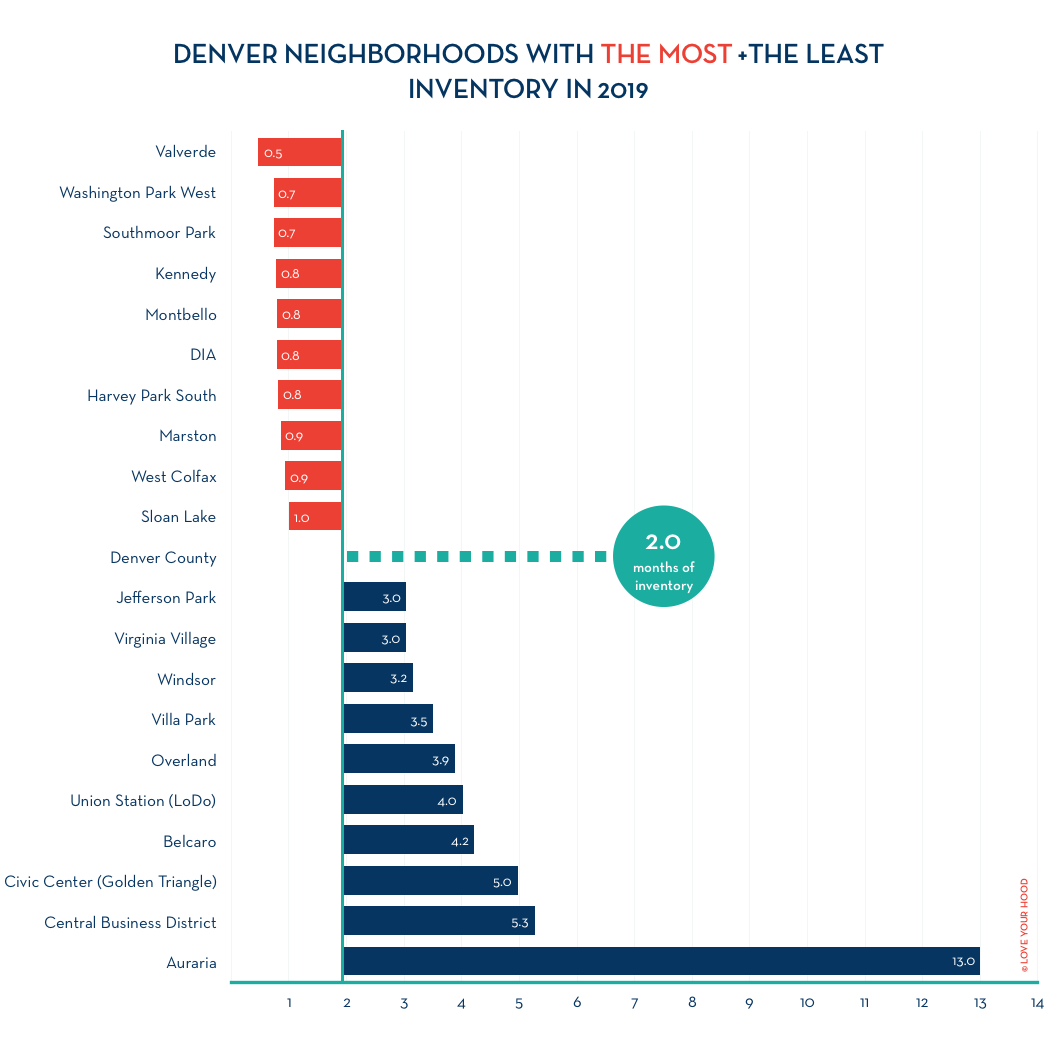 Map of Average Months of Inventory by Denver Neighborhood

This heat map shows how inventory is dispersed throughout the city of Denver. What jumps out about this map is neighborhoods with the most desirable reputations in Denver have some of the highest months of available inventory! These coveted neighborhoods are the ones that are and have been dotted with cranes for the past year, like Google Maps pins for capitalization.

Looking at a statistic such as housing price changes last year would lead a homebuyer to believe that Denver is growing just about as fast as the past few years, nothing new to see here.

While this is partly true, reflecting on the individual personalities and statistics for each neighborhood reveals more. Denver’s growth in the past 5-10 years can be attributed to a thriving economy and large influx of new residents, but in 2019 our growth is beginning to be driven by investment and development in specific neighborhoods. As a result, the growth is becoming more segmented and more tangible as buildings rise up in these neighborhoods.

Though some hoods are hotter than others in different metrics, every neighborhood in Denver has something unique to offer. Geared up with these statistical tools and a willingness to explore the neighborhoods around you, you’re one step closer to finding the hood you can call home. 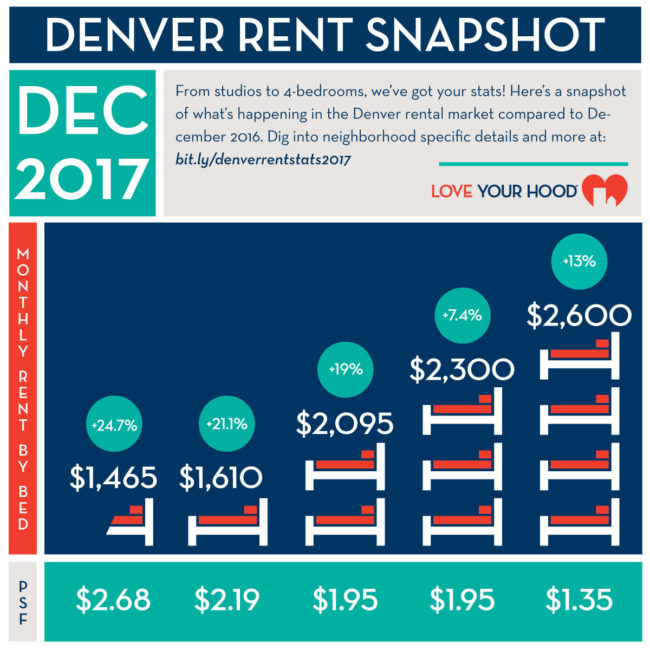 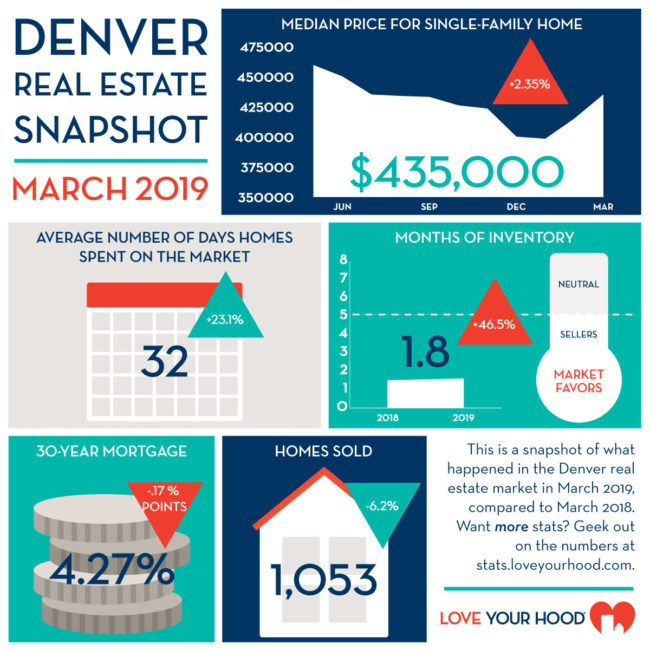 Just when we thought the Denver real estate market was cooling… 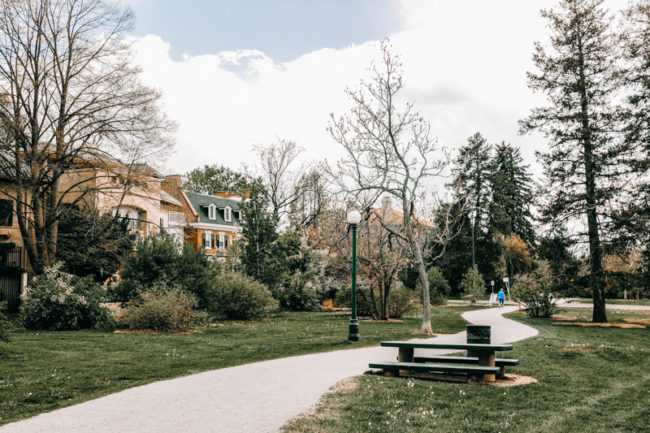 How the Pandemic is Affecting the Denver Real Estate Market